2022 and the two-thirds gender rule: Will Kenya get it right this time?

On August 9, 2021, exactly one year to the 2022 General Elections, the Independent Electoral and Boundaries Commission (IEBC) released a calendar of events leading to the day.

The IEBC chairman, Wafula Chebukati, consequently warned that the “IEBC will reject party nomination lists which will not adhere to the two-third gender rule”.

As we approach next year’s elections, the question on Kenyan women’s lips is, “Will the two-thirds gender rule be achieved this time round?”

Several attempts to attain the gender rule have not been successful in the past, causing Kenya to lag behind other East African countries in representation of women in electoral positions. In fact, neighbouring Tanzania recently became the first country in East Africa to have a woman President.

The latest attempt to take care of the gender rule through the Building Bridges Initiative (BBI) also flopped when the Court of Appeal in late August 2021 ruled that the BBI’s process was flawed. The proponents of the BBI case have filed the case at the Supreme Court, the highest court in the land but even that court is unlikely to go against the rulings of the lower courts.

In 2020, then Chief Justice David Maraga advised President Uhuru Kenyatta to dissolve Parliament for its failure to comply with the two-thirds gender rule. 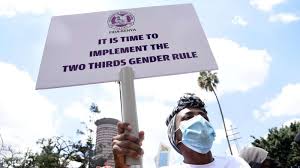 In Kenya, women form the majority at 53 per cent of the population. If the numbers could translate to electoral posts, the narrative would change.

However, there are many challenges that prevent women from actively engaging in politics; such as lack of funds and political goodwill from the political class, outdated cultural practices and discriminatory electoral laws that tend to favour men, among others.

It is because of these challenges that some communities have not elected any woman since independence. A good example is Kisii and Nyamira counties. The mistake that women aspirants make is to depend on their male counterparts for support, thus limiting their bargaining power despite the ‘majority’ factor.

It is time women professionals rose to support one of their own.

For a long time, professionals have taken a back seat because they live in the big cities. They should take note of the fact that when bad leaders are elected, those who suffer are their mothers, fathers, brothers, sisters and relatives whom they left in the village.

If they unite and elect good leaders, their kin will be assured of good road networks, hospitals, schools and other basic services.

Female aspirants should hit the road running now that campaigns for the 2022 elections are on top gear, and they should demand for what is rightfully theirs.

Women aspirants from counties with zero women in electoral positions should benchmark with women from other counties who have managed to win electoral posts. This way they can be ready to deal with challenges from an informed point.

Similarly, civil society groups and others dealing with political processes should support women aspirants in pointing out issues that hinder women from participating in elective politics and raising them with the relevant authorities.

The media can also play a big role in highlighting issues affecting women aspirants. This way, perpetrators of electoral violence can be brought to book.

Besides, the media can run workshops and seminars aimed at sensitising women on the importance of supporting and electing one of their own.

– Dr Stella Onyiego is a Senior Lecturer in Communication at Moi University.

Every story is a gender story, journalists told

Journalists from various media houses in Kenya went through training on gender and election reporting. The training held by Gender ...

Theresa Njeri, a mother of three, is pregnant with her fourth child. Though she feels tired and weak because of ...

There has been concern about the uptake of maternal healthcare services’ after the disruption caused by the outbreak of the ...

By Dibo Willis, M. When she received a cow under the One Cow Initiative, Linet Wangila, from Eshisiru Centre in ...

By Sharon Atieno Though African countries are struggling to secure more COVID-19 vaccine doses for their populace, vaccine hesitancy remains ...

A section of netizens have asked Kenyans to shun sexual harassment at the work place, including in newsrooms. Their reactions ...